Active Autowerke has been an industry leader in engineering high quality BMW performance products for over 39 years. Dedicated to improving enjoyment of your driving machine with the highest quality products, Active Autowerke has been recognized as the leading BMW innovator. Our philosophy on developing refined BMW performance parts and making  them available to the larger BMW community is highlighted by our most recent R&D program focused on improving the sound of the S55 exhaust. This R&D has resulted in the development of the Active Autowerke F80 M3 and F82 M4 equal length mid-pipe (patent pending) – the other option to our world famous F8X single mid-pipe.

An inline 6 engine naturally has an evenly spaced exhaust pulse which results in a more smooth and full sounding noise. However, the twin turbo setup of the S55 engine while producing addition power has created a sound which sounds more like 2 independent inline 3's competing for noise than the throaty sound one would expect. The variance between the lengths of the front and rear down-pipes of almost a foot and a half creates unevenly spaced pulses so that when the merge in any form of crossover system whether stock, x-pipes, double x-pipes, single mid-pipe or rear-section solutions. Since the sound waves are moving at the same rate when they exit the system, these crossover sections are simply creating a higher pitched sound resulting in the annoying sound some have referred to as a weed eater sound. The current systems allow the banks to merge unequally pulsed sounds and after much research and testing (from many BMW experts) it was determined that equalizing the length of the exhaust pipes before mixing was a solution to this sound problem.

Initial exhaust solutions focused on correcting this variance in the space behind the differential housing with one complaint being the inability to keep existing rear exhaust systems. Active Autowerke decided to leverage our expertise in having already developed a single mid-pipe system for the F-series M cars and devoted our R&D resources into developing the mid-pipe solution which you see here. Our R&D looked at the ways this could be done and while making up the difference in the rear section of the exhaust seemed like the most logical place, it would require a brand new rear exhaust system and we were aware that many BMW owners would not like this option. So we looked at adding length to the passenger side midpipe section and creating a new crossover section to create an exhaust note that's never been akin to the "S55 sound". Using a patented solution of a crossover with sinusoidal pipes allowed us to correct the downpipe length variance before mixing the sounds giving the expected 6 cylinder sports car exhaust notes.

The Active Autowerke F8X Equal Length Mid Pipe was specifically designed to create equal length exhaust pipes adjusting for the difference between the front and rear banks of the F80 M3 and F82 M4 down pipes before mixing in an X-pipe and creating an exhaust note different from the normal "S55 sound". Engineered for an exact fit on both the F80 M3 and F82 M4, the difference in sound with this mid pipe will be noticeable the first time with an open throttle!

PLEASE NOTE: IT IS STRONGLY RECOMMENDED THAT CARS WITH CATLESS (STRAIGHT-THROUGH) DOWNPIPES USE THE RESONATOR OPTION FOR THE EQUAL LENGTH MIDPIPE.

Brothers Mike and Karl Hugh were bred to play with power, it seems. As young men growing up on an island, doing things correctly for oneself became their ingrained credo. Their adolescent projects – bicycles and dirt bikes – were always the best performing. And that soon set the tone for the BMW tuning hobby they graduated to. By 1981, Mike and Karl were ready to get serious about their longstanding passion for a higher standard of BMW performance. Active Autowerke was born. Their motto at the time: "Anything and Everything BMW". They probably should have included “everyone” in there, too – since the endeavor was a classic family affair – with many branches of the Hugh family tree pooling their talents. The timing was ideal, and the company quickly grew as America’s motoring public developed a healthy appetite for the Bavarian treat. Soon Active Autowerke had grown into the largest independent BMW service center in Florida – with the most sophisticated equipment arsenal in the industry, certifications from leading componentry firms such as the Robert Bosch Corporation, and repute for setting the benchmark for service, integrity and professionalism.

(No reviews yet) Write a Review 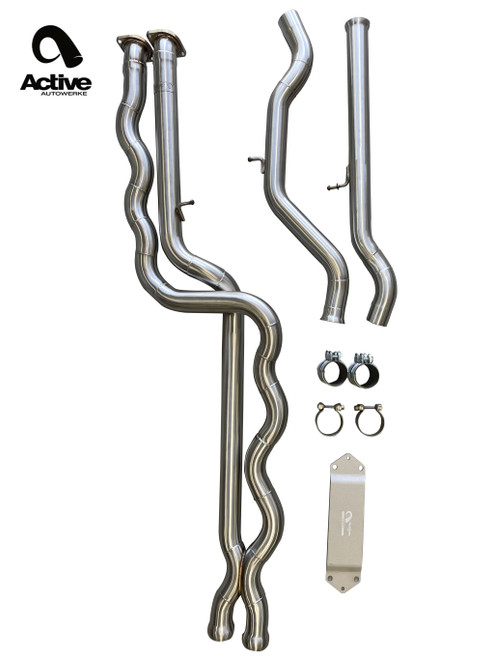